In a straight-line race, the Porsche Taycan and the Tesla Model S are reasonably close. But introduce VIR's two dozen corners and the difference between this year's Taycan Turbo S and the P85D we ran back in 2016 stretches to a 22.2-second gulf, a gap as cataclysmic as the one between a Miata and a Ferrari 430 Scuderia or a Camry and a Charger SRT Hellcat. The Tesla couldn't survive a quarter-lap before overheating and cutting power, which makes any more detailed comparisons—such as speed through the esses, where the Taycan averages 14.8 mph faster than the Model S—irrelevant. Even better than being fast, the Taycan Turbo S is like the company's other cars in that it is easy to find and probe the performance capabilities. At Lightning Lap, drivers typically uncover many seconds over the three days of lapping as they solve the puzzle of extracting a car's potential. Not so with the Taycan. The difference between our quickest lap from our first session and our overall quickest was just 1.2 seconds, the smallest improvement of any car this year.

Zooming in on the details only makes the results more astounding. For instance: At 5222 pounds, the Taycan is the fourth-heaviest Lightning Lapper ever and the porkiest non-SUV, yet it's the quickest member of the over-5000-pound club. The carbon-ceramic brakes never fade, and the tires, an EV-specific variant of Pirelli's P Zero PZ4, keep their grip lap after lap. Thrusting out of corners, or in those moments that call for a brief squeeze of power, the Taycan delivers an instant punch that's otherworldly. And though Porsche claims the Taycan reserves its full 750-horse fleet for launch-control starts only, we kind of doubt it. The Taycan's big speed at the end of the front straight—not typically an EV strength—makes us believe there's more than 616 horsepower at play. Really, the only spot where the Taycan's poundage seems to have a negative impact is in the esses, where we find ourselves backing off just slightly—still averaging a heady 120.2 mph—to keep the car settled and on the track as we crash over the curbing. Hot-lapping EVs is an unfamiliar exercise, so Porsche brought along two identical cars, just in case. But the spare proved unnecessary, as the Taycan is the first EV that didn't crumble against the Lightning Lap grindstone. It endured, without issue, our typical lapping schedule: a brisk out lap, a fast-as-you-dare hot lap followed by a cool-down, another hot lap, and then a cool-down before heading back to the pits. Starting with a full battery from an overnight charge, the Taycan landed at about 40 percent capacity after this routine, which, interestingly, is a burn rate on par with the Shelby GT500's. To find the battery's limits, we did two consecutive flying laps once, which put enough heat in the battery to reduce power. We didn't have to alter our routine for charging, though, as there was ample time—about four and a half hours—to top up the battery while this driver rotated through his other cars. A 50-amp RV outlet in the paddock, a common find at racetracks, supplied the electricity.

More significant than being far and away the quickest EV, the Taycan places between the BMW M5 Competition and the Mercedes-AMG E63 S in the category of deliriously quick four-doors, regardless of power source. 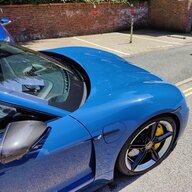 That guy wasn't a very good driver. The Stig could easily shave a second or two of that time, but still would be 7th place. So makes no difference.
Advertisement
You must log in or register to reply here.
Share:
Facebook Twitter Reddit Email Link