The future of EV roadtrips is bright - without competition for a 350kw charger across 14 charging stops, it was a seamless (and enjoyable) drive over 2100 miles of the Central US.

Only 2/14 chargers didn't exceed 250kw during the trip

Seven months into ownership I had not yet DC fast charged our Taycan, so a month back I drove 30 miles outside of Dallas to the closest EA charger in Royse City to ensure my app and car equipment functioned properly (it did). Fast forward to last week, what I initially planned to drive over two days was condensed to one day based on some work deadlines - the margin for error shrunk since I was meeting a buddy at 9am the next day in Louisville, 850 miles away, to kick off our first Bourbon Trail experience. I set a timer to overnight charge to 100% before heading north and woke up to an uncharged vehicle - I made the classic error of setting a 6:15pm timer as opposed to 6:15am. A quick flash of ABRP showed my mistake would save 3 minutes of drive time at the lower SoC

, which set the tone for the education I'd gain over the coming days. I read and heard that you should aim for 5% SoC when arriving to a charger but it didn't fully set in until on the road. The strategy of topping up the gas tank of an ICE during roadtrip stops is detrimental when it comes to the EV roadtrip. It's amazing to see how quickly the Taycan charges up to 50% (250kw+) and maintains 200kw+ to around 65%. Only one stop of the six on the 850 mile drive from Dallas to Louisville was over 17 minutes and my previous range anxiety was mostly gone after a second successful EA Fast Charger stop. Bowling Green KY EA, only charger I encountered with shelter from rain......but no nearby bathroom option

Indy
After a couple days of remarkable whiskey, I drove north to the Brickyard for Sports Car Together Fest. After attending last year and missing out on the "Parade" Laps due to my (very nice for the purpose) Hyundai Elantra rental, I was looking forward to attending this year with a Porsche. Based on the distance to Indy, I didn't require a charge, but decided to juice up on the outskirts of Indy before arriving at the hotel.

This stop was the first I encountered another EV at the charging station. Within a couple minutes of plugging in, I was standing with my passenger door open at the eight bay EA charger watching for the charging speed to display (it hit 260kw quickly) and a Jaguar i-Pace stopped within 5 feet of my body, waiting for me to move so they could park in the adjacent 350kw charger. There were SIX open 150kw chargers available but the driver clearly aimed for the 350kw unit despite the 85kw max rate the i-pace can achieve. While walking into the Walmart I realized she zapped half my speed after plugging in, quickly falling to 130kw. I debated commenting to her on the charger selection but thought it might come across as mansplaining and kept to myself. An Ioniq 5 pulled in minutes before I was about to leave and I proactively let the driver know I'd be leaving soon and he should wait for my 350kw charger. Had a good convo with this driver - he drove from Georgia and had a couple close calls with chargers along the way that gave him some major anxiety.

Sports Car Together Fest
SCTF was just as fun as last year - a mix of enthusiasts, including many families, were in great spirits and bonding over their love of Porsche, racing and the culture surrounding this brand. E-Sports was a bigger focus this year with a competition to win part of a $10K purse - I didn't attend but they had a dozen sims and spectator bleachers setup to watch the competition. Heavy rain descended during one of the Carrera Cup races on Saturday and a massive shunt sent the race to safety car for almost 20 minutes. This set the tone for the upcoming PCA Parade Laps, with the safety briefing taking place as the live race feed showed racers spinning on the damp edges of the track, reinforcing a 60mph maximum speed for the parade. The sun peeked through and dried out the track by the time parade laps started - the 718 Cayman pace car sped through turns but did cap us to 60mph on the straights. The CT4 really showed its character on the track.....heavy. Admittedly I have All-Season tires on the car but the body roll was significant and the go-kart feeling on the roads was gone on this wide and fast track. Nevertheless, it was a blast and I feel fortunate to have the opportunity to put our family hauler on IMS for a few laps. Short clip here, with my car being the first one in view (Formula-E scouts feel free to DM me) - there was a frozen blue taycan two cars behind me and a white Cross Turismo a minute or so behind, if that's anyone on the forum! One thing I did not anticipate was picking up the melted tire debris on the track and dealing with significant tire noise the entire way home. This has already burned off after 30 miles or so driving around Dallas, cornering a bit harder than usual to burn it off. Indy -> Dallas
Heading home, I had a few options that ranged from 930-1000 miles. After reading on PlugShare about Chargepoint and Francis Energy chargers in MO and OK leaving people stranded, I hedged my luck with a 45 mile longer route that used EA chargers exclusively. The drive was uneventful aside from an experience in the Paducah, Kentucky Walmart when a truck pulled up behind my charging vehicle, veritably blocking me in, around 8pm...in the dark toward the back of a sparse Walmart parking lot. I wasn't sure of the intent and immediately started thinking defensively (There's a recent thread about this that I also am concerned about and deterred me from pushing a drive overnight). Long story short, had a 10 minute discussion with someone who was skeptical but genuinely interested in EVs and asked every objection I've heard/read about EVs from anti-EV perspectives - he showed genuine interest in my responses to his questions and I tried to be as practical as possible. Here are the questions from what I can recall:
Summary and takeaways:
In terms of updates or critiques on the charging plan, I could not find a way to eliminate/skip a single charger. On the return trip, the car tried to direct me to a chargepoint stop that showed 5-10kw charging rate and I could not figure out a way to remove that charger from consideration. I had to game the charging planner by setting a closer destination on the route I researched and then adjusting the destination multiple times throughout the drive.

Wrapping this up, the Taycan is a phenomenal road trip vehicle and I look forward to more road trips as long as there is a relatively direct route with reliable DC Fast Chargers. The 350kw chargers on the EA network were very reliable (knock on wood) and I will be the first to say I lucked out with the absence of other EVs blocking chargers during my trip. The Taycan's charging planner was spot on, +/- 2% forecast even for the long pushes of 200 miles. I estimate at around 80-84mph, the range is about 230-250 miles, and maintaining 70-75mph pushes that up to 280 or higher range. 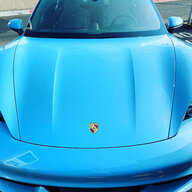 Great write up. Yes, that was my frozen blue just behind you on Saturday. I was on the parade laps both Friday and Saturday. Had the same issue with all the extra rubber on the tires for most of the drive home. I managed to scrub it off eventually but would have faster if I didn't have a fully loaded car for the ride home. I didn't want the contents to shift around too much during spirited driving or braking, especially with a couple cases of beer from my home state of PA that I can't buy in NM.
OP
OP

B_TaycanTurbo said:
Great write up. Yes, that was my frozen blue just behind you on Saturday. I was on the parade laps both Friday and Saturday. Had the same issue with all the extra rubber on the tires for most of the drive home. I managed to scrub it off eventually but would have faster if I didn't have a fully loaded car for the ride home. I didn't want the contents to shift around too much during spirited driving or braking, especially with a couple cases of beer from my home state of PA that I can't buy in NM.
Click to expand...

Re: the tire rubber, I was surprised how much louder the tire noise was considering it was just a few strips of rubber stuck on. I dove onto the rumble strips a few times on I-70 which seemed to dislodge some of it but wasn’t nearly as effective as I hoped.

I similarly had a case of bourbon padded and wedged behind my seat so it wouldn’t shift. The thought crossed my mind that the German EV would make for a good bootleggers vehicle or early NASCAR, assuming there were fast chargers available every 100 miles lol 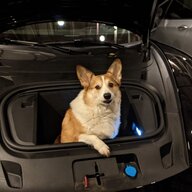 Jrkennedy37 said:
Re: the tire rubber, I was surprised how much louder the tire noise was considering it was just a few strips of rubber stuck on. I dove onto the rumble strips a few times on I-70 which seemed to dislodge some of it but wasn’t nearly as effective as I hoped.

I similarly had a case of bourbon padded and wedged behind my seat so it wouldn’t shift. The thought crossed my mind that the German EV would make for a good bootleggers vehicle or early NASCAR, assuming there were fast chargers available every 100 miles lol
Click to expand...

Yeah, it's also known as tire marbles. On a track, it's a nightmare cause it ends up reducing your overall grip as well. At national levels of autocross, you will see people with oscillating tools hooked up to gas generators in grid to scrap off all the marbles they pick between runs.

It also gets stuck to your shoes too when you're doing course walks. A great way to resole your shoes for cheap, but slippery when wet.

Also, one of the easiest way to clean that junk off is a wet skidpad.

If you live in a cul-de-sac, wet it down and then drive in circles like on a skid-pad. Of course you'll probably get some angry looks from your neighbor. If not, then at you know you have some awesome gearheads for neighbors.
Last edited: Sep 12, 2022 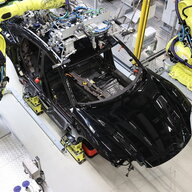 Thanks for this thread! I'm waiting on my 2023 RWD Taycan to arrive in November. I live in Houston and I make a lot of drives between Dallas and Houston so hearing how well this car does during long distance travels just get me even more excited about what's to come!

My deal for trip planning is that I don't necessarily want the shortest drive (time-wise).
If there is a good restaurant or place to shop on the way, I would gladly add a half-hour to many trips by charging there versus the optimal route plan. The EA chargers where I live are at Targets and Walmarts - often not where I want to spend time.
If I could say something like, "this charger is worth an extra 30 minutes" to the planner, that would be useful. 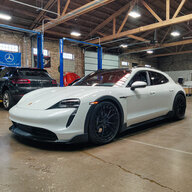