As the Porsche Carrera Cup Deutschland prepares to celebrate its season opener at the 24 Hours of Le Mans this weekend, the new safety car for the series – a Porsche Taycan – has been weaving its way west to the Circuit de la Sarthe.

What a start to the new season: as part of the legendary 24 Hours of Le Mans, the Porsche Carrera Cup Deutschland will stage a 45-minute opening race on the Circuit de la Sarthe tomorrow (Saturday). The German drivers are returning to the race track for the first time this year and will line up on the starting grid with competitors from the Porsche Carrera Cup France series. For the organisers, teams and fans of “Germany's fastest one-make championship”, the race is one of the highlights in the run-up to the endurance classic, which this year marks the 50th anniversary of Porsche’s first overall victory at Le Mans.

While the Porsche 911 GT3 Cup cars have been transported to the event by truck, the new safety car for the one-make championship – a Porsche Taycan Turbo – had the opportunity to combine the journey to Le Mans with a road trip across France.

The journey started at the headquarters of Porsche Germany in Bietigheim-Bissingen. After Alexander Pollich, CEO of Porsche Deutschland GmbH, gave his blessing, the trip continued towards the Porsche Experience Centre Hockenheimring. At least once a year the Porsche racing cars compete here in the Carrera Cup – and the series’ new safety car is also at home here. As soon as the Taycan’s tyres warmed up on the handling track, the road would lead towards France.

The car cruised silently westwards over country roads and motorways, past deep forests and awestruck fellow road users. After all, it is not every day that you see a Porsche Taycan on public roads with black, white and red race trim and warning lights on the roof. This Taycan Turbo is used as safety car at the Porsche Carrera Cup Deutschland
However, even more impressive is what is concealed underneath the striking livery: with a power output of 500 kW (680 PS; Taycan Turbo: combined power consumption 28.0 kWh/100 km, combined CO₂ emissions 0 g/km; as at 08/2020) and the ability to accelerate from 0 to 100 km/h in 3.2 seconds, the Porsche Taycan Turbo not only holds its own with the Cup cars on the race track: thanks to a range of more than 400 km and outstanding driving comfort, the first all-electric sports car from Porsche is practically made for a fast-paced continental road trip through some of Europe’s most beautiful countryside.

The stops on the route between Hockenheim and Le Mans can also be easily defined: with Porsche Destination Charging, guests of selected hotels, golf courses and marinas can access more than 1,000 charging points across 20 countries. Not only can drivers top up the batteries of their electric sports cars at these charging points, they can also take in some cultural and gastronomic highlights. Moreover, the high-power charging stations of Porsche’s technology partner Ionity can now be found at more and more stops along European motorways. With their 800-volt technology, these can recharge the Porsche Taycan in the time it takes to stop for a coffee. In France, the Porsche forged confidently ahead towards the sun against a backdrop of gently rolling hills under a deep blue sky. The first vineyards of the famous Champagne region soon came into view. The grapes for the champagne by Louis Roederer – a long-standing partner of Porsche in France – also grow here in the hills around Reims. However, for motorsport fans, this region is memorable for a very different reason: from 1926 to 1966, the Circuit de Reims-Gueux was, alongside Le Mans, one of the epicentres of French motorsport. Even Formula One race cars once roared along these country roads.

Today pit areas, stands and scoreboards in varying states of disrepair serve as reminders of this glorious era in motorsport. The opportunity was taken to stop, step out of the car, and drink in the atmosphere of this exceptional place. The Porsche Taycan is the epitome of futuristic design – and yet with its curved fastback silhouette and classic motorsport livery, it fits surprisingly well into these surroundings. After all, the motorsport DNA is timeless.

The safety car was then charged at the Royal Champagne Hotel – one of the exclusive partner hotels in the Porsche Destination Charging network – while the drivers and co-drivers discovered the culinary heritage of the Champagne region.

The next morning, an early start was made towards Paris: at sunrise, the Taycan was already gliding through the narrow streets of Montmartre and up to the Basilica of Sacré-Cœur, where devoted fans light a candle for their favourite racing drivers prior to the weekend of Le Mans – and where you can enjoy a glorious view across the city as it stirs to life. The Porsche Taycan then took a detour to the Champs-Élysées and made a quick circuit of the roundabout around the Arc de Triomphe – the smallest, yet possibly the most famous “circuit” in the world. Before the boulevards of the French capital became congested with rush-hour traffic, the Porsche Taycan was already on its way again. With the Paris skyline disappearing into the rear-view mirror, the endless, ruler-straight country roads of Central France stretched out ahead through fields and forests. Behind the wheel of a Porsche Taycan Turbo, moving powerfully forward with uninterrupted acceleration, these roads offered an entirely new experience: one of pure driving pleasure.

The Porsche Taycan stopped for a photo in front of the Hotel de France in La Chartre-sur-le-Loir. The image of the Porsche 917 LH raced by Derek Bell and Jo Siffert, parked here so casually in front of the entrance as it awaited pick-up in the transporter to Le Mans in summer 1971, is one of the great snapshots in Porsche’s racing history. The Taycan safety car also cut a fine figure – and was even able to cover the final kilometres to the circuit unassisted, unlike its historic predecessor. The final destination was now drawing visibly nearer; every petrol station and each car wash here bears the images and insignia of the most famous 24-hour race in the world. The safety car finally arrived in Le Mans – Porsche’s second home. Works drivers have taken their place at the top of the podium no less than 19 times since the first overall victory in 1970 – more than any other marque. While the commuter traffic still drives along the country road, this weekend the same asphalt will host the best racing drivers in the world as they contest the championship title. Indeed, one of the Carrera Cup drivers will also be able to call themselves Le Mans champion following the opening race on Saturday.

At the Porsche Experience Centre in Le Mans, Hurui Isaak, Project Manager of the Porsche Carrera Cup Deutschland, took the wheel of the by now well-travelled safety car. The Porsche Taycan had covered over 800 km – under its own power, always retracing motorsport history, with enjoyable stopovers and charging breaks along the way providing rich opportunities to discover the local culture and cuisine.

Like its predecessors, the first all-electric sports car from Porsche feels equally at home on the race track as it does on the road. All that remains to be done is to take the champagne crates out of the luggage compartment before the Porsche Taycan safety car sets off on its first outing in Le Mans on Saturday. 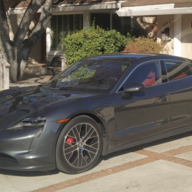 Some confident words from AutoBlog

Porsche pulled the covers off its new Taycan safety car Friday, ahead of the 88th running of the 24 Hours of Le Mans, where it will make its debut with the Porsche Carrera Cup Deutschland series. The support series will start its season Saturday with a 45-minute sprint race that will run prior to the weekend's 24-hour marathon. We may still be years away from seeing an electric car tackle the world-famous endurance race, but if we had to bet money on who'd be the first, Porsche would be up there.
Click to expand...