A nice article from e-Racing with interview of Lars Kerns on learning from Tesla and Porsche Taycan experience on the Nurburgring.

Great closing quote from Lars regarding the Taycan:

“Im used to testing the GT3 RS and others, so if you can impress me with an all-electric four-door sedan it must be pretty good!”
Click to expand...

Porsche’s Taycan Tester who Took a Tesla for a Spin The 7:42 figure was a landmark for Porsche as it proved that the brand’s first electric sedan could equal some of its best internal combustion engine-powered sports cars in the performance stakes.

Kern’s run poised the Taycan for its launch the following month, which marked the arrival of a four-door EV to challenge market powerhouse Tesla and the Model S series.

Comparisons between the two companies – one young but firm-rooted in electric tech and the other steeped in automotive heritage – have made for an interesting and unexpected automotive rivalry.

Porsche’s arrival into the four-door EV game required it to make a punchy entrance, not only to pique the interest of Tesla’s customers but also to win over its own followers, many of whom are of the traditional petrolhead order.

This led to Porsche going for the record time at the Nürburgring, but to reach that point the brand first looked at what its American counterpart was doing with the Model S range.

Indeed, way before the record run, Kern was tasked with gathering intel on Tesla’s take on the four-door EV by jumping behind the wheel of a P90D for a benchmarking exercise at the Nordschleife.

It might seem strange that one brand would go after another by testing its cars, but that was an easy best way for Porsche to understand where it needed to go with the Taycan.

“Our competitors are better than us on some parts and on other parts we are better.

“If we feel there’s somebody doing a good job, we will buy or rent the car and just have a look at it.

“There was no competitor to Tesla [before the Taycan] so if you built an all-electric car you had to have a look at what they did, so this is what we did.” Kern was the right person to sample the Tesla because his job at Porsche is to give feedback on future road cars to make them perfect for paying customers.

He felt the session behind the wheel of the P90D was useful in deciding how best to manage the Taycan’s twin electric motors at peak performance.

It also helped to light a fire under the cause for a legitimate competitor to Tesla in the four-door EV market.

“We went to the Nürburgring and expected to do an OK lap because on the street the car feels pretty good,” recalls Kern.

“But actually, I drove four or five kilometers and it was overheating and the lap time was about 9:30, but just because it didn’t give any power.

“It was pretty interesting for us. Then it was funny that as soon as we did a lap record with the Taycan, the guys in the USA jumped on it.

“It’s the best marketing because we just did the lap and they made it big, so everyone was talking about it.

“Then Tesla came in with the wings [on the Model S series]. For them, it’s good because they’re going to gain experience. We like the competition, so we are happy.”

After Kern’s sampling of the Tesla, Porsche went back to Stuttgart to concentrate on developing the Taycan.

Porsche’s final product is a marvel of EV engineering with the top Turbo S model capable of producing 560 kW (750 hp) from its front and rear-mounted electric motors.

Perhaps the most impressive element, from Kern’s side, was how nimble and balanced the 2,300 kg (5,000 lb) Taycan could be when pushed to the edge.

“This just gives you a completely new way to drive the car. Even with a [Porsche 911] GT3 R, the centre of gravity is higher than in a Taycan.

“But then you start to drive the Taycan and the nose isn’t dipping, and you say to yourself, how is this possible? For a customer, it gives them the chance to get close to the limit of the car easily.

“It’s like a simulator: you do something, and the car just does it. You can even drift it.” Kern is obviously biased as a Porsche employee and lifelong admirer of the brand, but he’s convinced that the Taycan is right up there with the company’s ICE products.

He also hopes to test Porsche’s other future electric racing models whilst also continuing to balance an enviable double life as a test driver and professional racer.

“I have told people this quite a lot within the last year and people say, ‘He has to say it because he works for Porsche’ but then they drive it and call me and say, ‘F*** yeah!’

“If you have four motors it starts to be super interesting what you can do with driver dynamics.

“From now on, we’re going to do more electric race cars, like all manufacturers are. I’m pretty interested and curious about how it’s going to be.”

Kern’s role in developing the company’s high-performance road and race cars had rarely put him in contact with electric machinery before the Taycan took off.

He was, therefore, a tad reluctant about getting behind the wheel of a machine that carries a totally different philosophy to the ICE models he has spent years perfecting.

“From the start, I said I don’t want to be involved in that,” he admitted.

“I said it’s heavy, it’s electric… I’m just not interested. But it’s my job, so I said I would lap it to make sure everyone was happy.

“I was not really involved at first, but then I drove the car and I asked how it was possible. At the end I was asking, ‘Is it really that heavy? How did you make the car handle like this?’

“In the end the car will be great in customer hands. That’s the target of the car; it’s not me being happy, although I was impressed.

“I am used to testing the GT3 RS and others, so if you can impress me with an all-electric four-door sedan it must be pretty good!”
Last edited by a moderator: Jan 21, 2020
EV fanatic but Porsche rookie 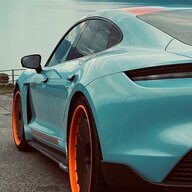 Tesla Who? The Porsche Taycan Looks To Raise The Bar For Future Electrics - BuffaloRising