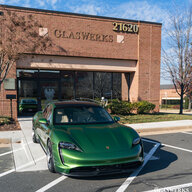 Good evening everyone, Apologies, i'm just sitting down to finally write up my recap of our event we held on Summit Raceway July 15th. (Long) We rented the entire Main circuit, We had about 30 drivers divided into 3 groups. Each group had at least four :30 run sessions, In the basic and intermediate groups everyone was paired with their own instructor. Advanced solo could drive by themselves. Each group also had 2 classroom sessions throughout the day to focus on any deficiencies that were uncovered in the previous sessions.

Summit point Motorsports park has multiple 50KW chargers in place. They were free to us since we rented the entire facility. I was told otherwise they would be comparable rates to other local charging points. Additionally there's a Sheetz about 16 miles away with Electrified america 250KW level 3 charger. Free track Juice! I started my first Session around 9AM, It was 82F out and a very muggy 60% humidity, 97% Battery charge, computer said 231 miles of charge. AC off, Ventilated seats on, Windows down (track rule for NASA) I kept the Taycan in Sport+ mode the whole day and we lowered tire temps as needed. I purposely started off last in my intermediate run group so i would be able to visually compare my corner exit speeds with other drivers on the track. My original thought was to leave Regen on to lengthen pad life. We're running the stock Steel brakes after all. Once i got the track layout down I started leaning into the car harder. After Braking hard at the end of the main straight into turn one I immediately turned regen off. Apologizing to my instructor for the Oh shit!! moment when ABS lit up at 110mph as the car transitioned between part pedal regen braking and friction braking. not a very good feeling at all! At the end of the main straight I was seeing slightly over 140MPH. Through turn One I was able to start applying throttle much earlier than the other cars I was on track with. I suspect the sheer Mechanical grip provided by all the Chassis goodies as well as the Michelin Pilot Sport 4 Tires meant I was able to deploy more of my power reserves sooner than the ICE cars around me. Between 2-3 I let the car run as far possible to the right side of the track topping 100mph here before trail-braking slightly and rotating it hard into the slight uphill left hand turn 3, Get this transition right and the small kink exiting 3 seems to disappear as the car pushes wide right on the edge of grip. FULL throttle down the hill getting the car positioned left of center trail brake in here to get more grip over the front end, the moment you stop turning the front wheels full throttle for just a moment then HARDDDD on the brakes for the crazy sharp left hander. This was the best part of the track for the Taycan. The AWD grip, instant TQ, freaky body control abilities & rear steering meant the Car essentially slingshots out of this corner so violently that you forget it weighs more than a bus. 5-6 happens so fast you barely have time to reign the car in breaking into 6.

6-7-8 is a chicane, very flat & wide with kerbing. Perfect area to play with the neutrality of the car. As i progressed i realized i could lean on the cars clever systems to just sort the amount of power i needed between the turns out for me. I picked up a lot of time on the ICE cars through here.

Exiting turn 8 the track falls away as it unwinds into this decreasing radius right hander thats slighting uphill then dives down under the drive over bridge I saw 115 MPH through here repeatedly dropping to around 90 MPH for the entry of corner 10. Once I started trusting that there would be road for me if i let the car unwind i was eventually exiting 10 onto the main straight at around 100mph.

My Instructor noted over 1G spiking 1.2-1.4G Through some of the faster corners.

During the :30 min session I was able to pass every car on track with me with the exception of the Porsche GT3 and our own GT4 driven by a friend of mine. I shared the track with the following cars

At the end of our :30 min session the car was still going strong with an indicated range remaining of 37 miles. after a few cool down laps we brought the car in and checked over everything. NO SIGNS of uneven or excessive tire wear!!!! I forsure thought the tires would get cannibalized under the 2.5 ton missile. The steel brakes on the other hand....we ate through 1/3 the available pad thickness in :30 mins. Yikes!!!! BUT the rotors were absolutely fine. we never boiled the fluid or saw a mushy pedal. I found I could do one flat out flying lap as hard as i could 1:28-1:30 then the next lap i would back off a little. 1:37+ a lap. This strategy ensured that I didn't overcook the tires, Boil the brake fluid or overheat the battery. Immediately after the session my minions drove the car to the electrified america charger and rapid charged it on a 150KW charger . 21 mins to get it back to 90% NOT BAD AT ALL. Once back at the track the taycan was plugged in to the 50KW charger to trickle up until it was time to hit the track again.

The later session I ran with the car was just as fun but the mid day 98F temps meant the track was slippery and the car didn't seem to like the heat. Imagine wrestling a bear covered in butter (I know dumb analogy but paints a picture doesn't it) I felt the car pulling power back in the big speed sections of the track. STILL I actually finished the session with slightly more miles remaining on the charge. After checking the tires and brakes we decided against more sessions with the car. After roughly 80 miles of track driving we had managed to erase almost all of the pad life and since we didn't bring spares we didn't want to push it harder.

I eventually managed 4 more sessions that day with our shop GT4.5 but that's another story for another night.

The Taycan absolutely loves Trail Braking!!!! In closing I was absolutely shocked at how capable the Taycan 4S was on track. I mean we're used to hearing the OEM's tell us about how their car was built for the track or that it can do XXX around your favorite circuit. Before our track day I would've never thought a fully electric 5000+ pound car would not only be capable of delivering the performance It did but in doing so showed me something I rarely see in cars these days let alone something lacking pistons and a gearbox....Soul....The Taycan has a soul. Buried under the clever layers of programming code & copper windings is a beautifully balanced playful thing that begs you to push harder and harder. The way it moves power for and aft seems far more organic than any conventional AWD drivetrain I have ever driven. Unlike all other AWD cars I wasn't annoyed the car wouldn't transfer power where i wanted it fast enough. Well done Porsche! As we packed up I climbed into the Taycan & thumbed the playstation power button left of the wheel. Massage seats on I effortlessly pulled away to begin my 50 mile journey home. I can't help but wonder to myself if Porsche had everyone involved with designing the Taycan read Robert Louis stevenson's Jekyll & Hyde. In a car so capable that compromises so little what else can we possibly want more of? What do they have left to show us? Time will tell but now I'll go ahead and get my Taycan Turbo Cross Turismo on order because who doesn't want to see a 5000# station wagon whooping up on dedicated sports cars.......


I hope everyone enjoys my little recap. Feel free to ask questions and I highly recommend anyone thinking about tracking their car....DO IT!!!!!


For even more photos of our track day check the link https://www.facebook.com/media/set/?vanity=GlasWerksdmv&set=a.2922401771366686
Advertisement

that was amazing, thanks so much for telling your story.
OP
OP

dwaltchack said:
that was amazing, thanks so much for telling your story.
Click to expand...

Thankyou! What color is your Taycan CT?

Adrian, thanks for this write up. You guys did the PPF for my Ice Grey 4S a couple of months ago. I would love to drive this course in a Taycan 4S, but I would prefer it not be mine I was lucky enough to drive there during a Porsche experience day a couple of years ago in 911 and Panamera GTS versions and it was a blast, but way too short of an experience.
OP
OP

jkjjpc said:
Adrian, thanks for this write up. You guys did the PPF for my Ice Grey 4S a couple of months ago. I would love to drive this course in a Taycan 4S, but I would prefer it not be mine I was lucky enough to drive there during a Porsche experience day a couple of years ago in 911 and Panamera GTS versions and it was a blast, but way too short of an experience.
Click to expand...

You have the same idea as many of our Taycan owners, I have been talking to the local dealerships about a potential Taycan Drive event with Porsche. You will see an email if we are able to make it happen!
Advertisement
You must log in or register to reply here.
Share:
Facebook Twitter Reddit Email Link

Anyone do a track day with their Taycan?
2

Any Track Activity Yet?

Any track plans for your Taycan?