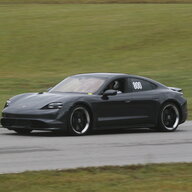 TL;DR - Taycan is good for 2 20 minute hard driving sessions on this 3.27 mile track. Driving easier (braking earlier in turns so regen recovers more kinetic energy) and charging between sessions can enable a third and possibly fourth 20 minute session before acceleration becomes limited due to battery capacity. Given a warm day and more aggressive braking and driving, the battery will likely overheat near the end of a 20 minute session which would also limit acceleration. It's an extremely heavy car (5200 lbs) and managing that weight through turns means earlier braking and turn-in. Power application at track-out though is nothing short of awesome and the precision with which you can control drift to the outside of the track is special. You will leave smiling. A lot. The stock continental all-seasons leave a lot to be desired on a dry track, but aren't too bad on a damp or wet track.

Upon learning that VIR has a CCS charger just outside the track, I joined a two-day HPDE event last weekend with the Tarheel Sports Car Club (good group!). This is the second time I've had the Taycan at VIR. I wanted to try the charger, and to capture some data on consumption, battery temps, tire pressures, etc. The Taycan is way more fun on a track than it should be considering 5200 lbs and all-season rubber, but there are real constraints to being able to fully track an EV. There was also a Tesla Model 3 Performance at the track, basically doing the same thing - charging in between sessions. And a Lambo Super Trofeo race car turning 1:50 lap times!

The VIR full course is 3.27 miles with lots of goodness - three long straights and 18 turns, several of which represent complex and interesting combinations. The Taycan's acceleration can allow for sphincter-tightening top speeds in those straights (I wimped out at about 140 MPH) followed by some equally sphincter-tightening braking zones where thoughts about what could go wrong sitting atop 5200 lbs of highly reactive lithium hurtling at 140 MPH towards a tire wall. I am by no means an expert track driver and my braking was conservative, which allowed me to complete 20 minute sessions without overheating the battery. Air temperatures in the 60s and 70s helped. Over the two days we had 8 sessions including dry track, damp track, and full-on rain with standing water. At least for the damp / wet runs, the energy consumption was even lower and the all-season Conti's were less of an impediment.

The CCS charger was functional, but only delivered 13.2 KW so in reality it was of no use, except to recharge before the 66 mile drive home. I charged as much as possible from 240/50 in the paddock between runs (limited to 37A or would throw grounding errors). I estimate each day I charged enough in between sessions to survive an additional session. Without charging, two 20 minute sessions would likely leave you with reduced acceleration in the third session.

Here are my notes. All driving in Sport Plus with PSM in sport mode (not disabled).

Based on chalk applied to tires to get an indication of wear, for this wheel/tire combo next time I'd start with front pressure at 35 and rear pressure at 36, re-evaluate, and consider dropping another PSI. Do you have a calculation for consumption in Wh/m on your runs? Would be interesting to see vs "normal" consumption. 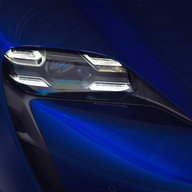 I finally got my Taycan on a track at Road Atlanta during a PCA event. Just parade laps, but even so I took a couple corners at speed and sweepers at 70mph+. I have very little track experience so the nuances are lost on me, but it was lots of fun!

I also finally have evidence that my spoiler actually deploys

As the guy following LonePalmBJ , despite his claim, I can attest to his repeatedly hitting the apex as evidenced by the photo.
OP

I thought about trying to track consumption, but was too busy to do things like reset the trip computer or keep track of the number of laps. If I were going to make a best guess I'd say 8 laps for the good sessions x 3.27 miles per lap = 26.16 miles. 39% of the usable battery capacity consumed for my fastest session (big variable here - both in terms of what a session consumed and exactly how much battery capacity that represents) = 32.6 kW. This would be 124 kWh per 100 miles. My trip computer for the day showed 78 kWh per 100 miles for several sessions, but at least one session was slow both days, so the actual number is somewhere between those two extremes.
OP

Track photographer gave you 6 pictures for $30. One of the ones I downloaded shows a good apex. Any track plans for your Taycan?

Anyone do a track day with their Taycan?
2

Any Track Activity Yet?