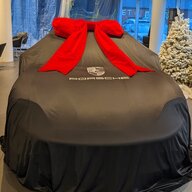 I have a 2016 Cayenne plug in hybrid. I have a dedicated 30A plug for this car and with the included Cayenne charger I can fully charge the small battery in about 2 hours, rough estimate around 7kw charging speed. Unfortunately with this 1st gen charger there isn't a lot more information available.

I have another 50A outlet which I use for the Taycan, using the new PMCC I can see it pulling the max 40A out of the circuit (well, usually 39 point something). Just for fun I plugged the new PMCC to my Cayenne and expectedly that dropped the amp down, but it went all the way down to 15amp! Resulted in a much slower charging. Only managed the get to 100% on the 14kwh battery after about 4 hours.

Isn't this a little odd? Why would the charging be slower with Taycan's PMCC than my old Cayenne charger plugged into a lower amp circuit?

Izzone said:
the charger is in the car....that regulates how quick it can take power
Click to expand...

I have done the same with my Taycan Turbo S and 2020 Cayenne e-hybrid. I did NOT opt for the optional 7.2 for the Cayenne so it came with the 3.6 setup. The Taycan charger will not deliver more than 15A to the Cayenne, but it does so without any problems.

My own question for the forum is as follows: Why does my (lowly/lightweight) Porsche 3.6kW portable charger (regardless of whether it is set at 50 or 100%) not work with the Taycan (which has the optional 19.2 on board). It plugs in.....and things seem to get off to a good start, but then it stops working after 10 or so seconds. I have not been provided with any meaningful error messages by the car or the charging unit other than the latter's lights on the front panel shift from green to yellow. I am waiting for the optional 19.2 home unit to become available in Canada........in the meantime, it would be helpful for me to have the option of feeding the Taycan with a low power charge. Also, I had wanted to stick the cheap unit into the frunk in the event that I get stuck somewhere and only have access to a basic wall receptacle.......at least I could charge up the car a little even if it would be painfully slow.
OP
OP

Gunther said:
I have done the same with my Taycan Turbo S and 2020 Cayenne e-hybrid. I did NOT opt for the optional 7.2 for the Cayenne so it came with the 3.6 setup. The Taycan charger will not deliver more than 15A to the Cayenne, but it does so without any problems.
Click to expand...

Interesting... I'm not sure why I can get 7kw with my cayenne charger but only ~3kw with the PMCC that came with the Taycan. Will play around with the settings on PMCC and see if it'll make a difference.
You must log in or register to reply here.
Share:
Facebook Twitter Reddit Email Link

Tesla superchargers open to other EVs this year

Is it possible to charge a Taycan using an electric eel?
2

Is 12V dead battery issue tied to PMCC and using profiles and timers?

Has anyone used the PMCC to charge a non Porsche EV ?
2