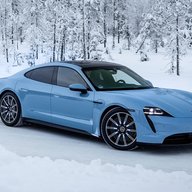 2020 Porsche Taycan crushes its EPA range in our exclusive test

A nondescript white van rolls up beside my blue 2020 Porsche Taycan Turbo as I sit at a red light on the Pacific Coast Highway near Huntington Beach, Calif. The driver rolls down his window, gives a hearty thumbs up, and makes it clear via additional hand signals that he wants to see me stand on it. His grinning passenger leans forward and seconds the motion with an enthusiastic nod.

I roll down my own window. “Sorry, but I’m in the middle of a range test.”

They seem to understand. When the light turns green they hang back, content to snap pictures as I accelerate away at a prudent pace. Normal driving is the goal here. To do this right I can neither be hyperactive nor drive like a hypermiler.

That’s because this test has two parts. The first is a controlled drive around a standardized test course I’ve used before. The second is a more freeform road trip to see friends in the isolated desert town of Borrego Springs, Calif.

At the end, I'm hoping to answer two questions we all have about the Porsche Taycan: Is the Taycan Turbo’s 201-mile range achievable in the real world? Can you travel out of town and have a little fun along the way without fretting over range?

A lap of Orange County — or maybe two
I’m driving on what I call my "Lap of Orange County" test loop, an EV range test course of my own design. It’s made up of suburban residential and arterial streets, along with a stretch of the Pacific Coast Highway. Speed limits range between 25 and 60 mph, with much of it in the 35-to-45-mph range. There are no outright freeways, but there are more than 100 potential stoplights and a couple dozen stop signs.

One lap of the circuit is 104.5 miles, which means that two laps would exceed the Taycan Turbo’s rated range by 8 miles. I’m hoping for two laps, but if I make it, I won’t keep going until the Porsche craps out along some random curb. That’s not safe, and it’s not a realistic reflection of how EV ownership works. Besides, no one wants to see the “winch of shame” onto a AAA flatbed.

Instead, I’ll add the miles remaining, if any, to the number of miles driven. This “projected range” figure should be quite accurate because the distance-to-empty calculation should be mature after all that time. Then I’ll plug it in and calculate consumption after it’s full. The Taycan’s consumption rating is 49 kilowatt-hours per 100 miles (kWh/100), which is frankly terrible.

Profiling in the O.C.
By my calculation, this is going to take nearly eight hours. But this course has enough to look at to keep things interesting. Along PCH there’s sun, surf, and enough G-Wagens to equip a small army. Not to mention the stoned surfers in white vans looking for an Instagram fix.

I start out in Range mode instead of the default Normal mode because, well, this is a range test. This configures the Taycan to prioritize its front motor, and it also drops the air suspension to low mode regardless of speed. What it doesn’t do is make the throttle pedal react like a dead fish. I usually won’t use the Eco settings in other EVs and hybrids for this very reason, but I’ve got no complaints here.

The road surface varies significantly as I roll through some two dozen municipalities, from aging cracked concrete and baked coarse asphalt to mildly undulating paved ribbons draped over sagging seaside cliffs. The air suspension takes it all in stride, and low mode only seems to lack enough travel over one particularly nasty edge.

As morning turns to midday, the sun melts through the marine clouds. I’ve got the climate control set to 72 degrees in full automatic mode (my standard setting for EV tests), and I don’t mind that Range mode engages the AC’s Eco program because I’m driving solo. The Taycan’s all-glass roof was a worry before I started, but its coating is proving more than up to the task of keeping the radiant heat at bay. Still, this isn’t summer, and I’m not in Phoenix.

This is going to be easy
I begin to get optimistic about the Taycan’s chances after about two hours. The number of remaining miles far exceeds expectations, to the point where the projected range works out to well over 260 miles. But I’m only about one-quarter of the way home. Too early to celebrate.

It’s worth pointing out how I drive this course. The idea is to play it right down the middle, being neither too fast nor too slow, too aggressive nor too meek. Traffic is free flowing, but clustered packs of cars usually define the pace anyway. When it’s more open and I can set my own pace, I’ll limit myself to about 5 mph over, which slots me between the leadfoots and the slowpokes.

The numbers are even better as I make the turn to pass my home the first time. The Taycan’s trip odometer indicates 104.6 miles driven and — get ready for this — 179 remaining. I marvel at the prospect of 284 miles as I begin lap two.

Traffic is slightly worse on the second circuit, especially as commuters start to mix in towards the end. My average speed drops a bit, but the gauge says I’m still pacing about 2-mph faster than my usual average speed on this course.

Lap two is much like the first, with my podcast backlog shrinking all the way. And then it’s over. I roll into my driveway with 209.2 miles on the trip odometer. After two laps of Orange County, the Taycan has surpassed its rated range by 8.2 miles, and it did so with another 78 miles on the range meter. That’s 287.2 miles of projected range, folks, some 43 percent better than the EPA rating.

For perspective, I have seen several other EVs — but certainly not all — best their rated range on this course by 20 percent or so. This result is significant because this is the first time I've seen a car crush it by over 40 percent. The mind boggles further when you consider that this particular Taycan Turbo rolls on massive Michelin Pilot Sport 4 summer tires instead of the workaday all-season rubber you normally see on EVs and hybrids.

Time to have dinner and recharge it for tomorrow.

Over the mountains from beach to desert
Phase two has no set speed, and I stick with the default Normal mode because this isn’t my formal range test. There’s also no standard route; I chose Borrego Springs because friends live there and the scenery is spectacular. It doesn’t hurt that the roads that lead to it are some of my favorites, the sort that automakers choose when they invite the media to drive their newest toys.

There’s some freeway mileage along the coast before the route turns inland, and here I let the Taycan run at the pace of the leftmost lane. I stop at a Cars and Coffee event for an hour or so, then head inland on a four lane with some stoplights. Then the two lane starts. My projected range hovers improbably close to yesterday’s end result even though I’m running on faster roads and taking more liberties.

Tourists soon dictate a pace I don’t like, and I make a snap decision to detour up and down Palomar mountain on S6 and S7, two of my favorite side roads. The way up is a sinuous hairpin-laden beast that would be in the Tour de France if this were France, but it settles for the Tour de California. There’s no one in front of me, so I do what you would do.

The Taycan’s fat Michelin Pilot Sport 4 summer tires produce immense grip as the electric Porsche leaps from hairpin to hairpin, utterly unfazed by the gradient. Tiny pebbles ting off the flat underbelly of the car as the dual motors noiselessly get down to business. The steering is even more precise and well-weighted than I remember it from an earlier drive in Europe, and there seems to be no end to what the brakes can do.

The more flowing road that leads back down reinforces a lament I’ve noticed before. I wish Porsche saw fit to enable a real lift-throttle regeneration driving mode that does more than merely simulate engine braking. I get it, it’s a drivers' car. But one-pedal driving can be massive fun, too. Give us a choice.

The last miles
I check the range gauges at the end of my 20-minute detour. The blast up and down the mountain cost me, but with 113.6 miles driven, the car says it still has 132 miles left in it. That’s still 245.6 miles of projected range. I’m impressed.

I’m even more amazed when I realize that there’s still another significant downhill stretch between here and my destination. Borrego Springs lies at a similar elevation to my starting point but, relatively speaking, I’m still in the highlands. Up ahead, highway S22 dives off the side of a mountain of boulders through dozens of coiled corners before delivering me smack into town.

The Taycan generates electricity all the way down, but the brake pedal feel is so outstanding that it’s unclear which percentage of the slowing is coming from the motor’s magnetism or the massive 10-piston Akebono front calipers. The regenerative system can generate as much as 0.4g, so I’d guess that even here the motor’s doing more than the rotors.

The numbers seem to bear that out. Once I’m at the bottom, I meet up with my friends, drive to the far edge of town to take some sunset pictures of the car, then go out to dinner. Finally back at their place, the two meters read 167.5 miles driven and 86 miles to go. That works out to 253.5 miles of projected range, otherwise known as 7.9 more miles than I had at the top of S22.

Bottom line: Stop worrying about the Taycan’s range
I’ve taken numerous trips in many different electric cars, so I was never concerned about the Taycan even if its range did prove to be “just” 201 miles. But it’s now abundantly clear to me that the Taycan Turbo’s real world range is easily better that the number the EPA gave it.

My result of 287 miles of projected range in around-town driving shows that there’s ample cushion if you drive normally. It took 72.9 kWh to replenish the battery afterwards, and the math works out to a consumption rate of 34.8 kWh/100. That’s fully 29% better than the EPA rating of 49 kWh/100.

It's true that most EVs can exceed their rated range when driven prudently, but I've never seen this much margin on this course. Still, an EV's published range is conservative by design, the result of lopping 30 percent off the number generated by the EPA test protocol. As it happens, 201 miles is exactly what you get if you take 30 percent off my 287-mile result. I'm not saying that my course mimics the EPA EV test pattern exactly, but maybe this result says something about the by-the-book nature of Porsche's numbers in the context of the EPA procedure.

Better still, the numbers didn’t plummet on a more spirited road trip. Higher speeds and a bit of light hooning up a mountain had an effect, but it was nothing like I expected. My projected range was still more than 50 miles better than its official rating after all that. So let’s agree to stop wringing our collective hands about the 2020 Porsche Taycan Turbo’s range. It’s more than fine. That's why we have kms instead of mls.
It's always more. 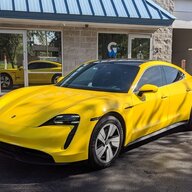 Good to hear. I'm sure we'll get to see many more similar articles come out as the vehicle is tested over and over.