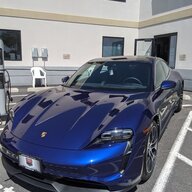 I just wanted to share a few thoughts based on doing the "Taycan Turbo vs 911 Turbo" comparison at the Porsche Experience Center in LA today. I know that comparison comes up a fair bit on this forum. It was really interesting to drive those cars back to back. While I was supposed to drive the Taycan Turbo, they actually gave me the Taycan Turbo S which was an added benefit.

For background, I have had my Taycan 4S for about 18 months now. I have driven a variety of 911's over the past 30 years although I have never owned one and I have never driven a 911 Turbo. I have been on the track probably 8 to 10 times but definitely still consider myself a bit new to it - there is just so much to learn to drive smoothly and quickly on the track.

I had each car for 45 minutes and got to experience them both on the low-friction circle, the dynamic area, and the handling circuit. We started with the 911 Turbo. Having driven the Taycan for the last 18 months, I was immediately struck by the engine noise on the 911 Turbo. While I don't necessarily miss it in the Taycan, it was fun to hear the rumble of the 911 Turbo. I also immediately appreciated how much smaller and more nimble the 911 is. You point it into corners and it just goes.

When I got back in the Taycan I actually took out a few cones on the slalom course in the dynamic area because I forgot how large the car is. The flip side of that is that I appreciated the car being a bit roomier on the inside. Definitely not a priority for high performance driving, but as a big guy, I definitely don't mind the extra room. Lastly, switching back to the Taycan reminded me of just how quiet the car is compared to ICE cars.

On the low-friction area I didn't notice a huge difference between the cars. The Taycan was actually a bit more of a handful with the traction control off - the torque breaks the rear wheels loose so easily, but the difference wasn't that huge. Once traction control was back on, both cars were very well behaved. It really is amazing how much traction control helps handle the power of these cars.

On the dynamic area we started with a slalom. As mentioned above, the Taycan was definitely at a disadvantage due to its size. We then focused on acceleration runs followed by maximum braking. During the first run we did not use launch control. I actually was kind of disappointed with the 911 Turbo in this exercise. I stomped on the gas and for a fraction of a second nothing seemed to happen. Once the turbo spooled up, the car quickly picked up speed. However, the Taycan Turbo S was the clear champion with its near instant torque - just so much fun. We then repeated the exercise with launch control. This time the cars appeared to have very similar performance. My conclusion was that the Taycan was going to be the clear winner for every day driving where you are much less likely to use launch control.

The handling circuit was definitely the highlight of the day as we were doing some pretty quick laps in both cars. The instructor was in a 911 Turbo and I was following closely behind in either the 911 Turbo or the Taycan Turbo S. We were moving pretty good as we passed 911 Carreras several times. You really noticed it down the straights where the enormous power of these cars quickly closed the gap with the 911 Carreras. There is no doubt on the handling circuit that the 911 Turbo is the car of choice. It is blisteringly quick, really connected to the road, and well balanced. That said, the Taycan Turbo S performed far better than I expected. While you do notice the size and mass of the car, it felt like we were going around the track at about the same speed in both cars. (They don't do lap tips at the Porsche Experience Center.) The instructor was pushing it in the 911 Turbo and I never felt like I was lagging in the Taycan. As a matter of fact, when he said to accelerate out of the corners, I at times had to back off a little because I initially was closing in on the back end of the instructor's car. Love that instant torque on the Taycan! One of the main things that really stood out was that both cars can build a ridiculous amount of speed in the short straights on the PEC course and then bleed off that speed in no time. I was at the at PEC three years ago and drove a 911 Carrera 4S at the time. It was quick, but nothing like either of these cars in terms of building speed.

In summary I am anxious to get back in my Taycan for every day driving. The mix of instant torque, a little more room, and level of quietness make it a perfect daily driver. On the other hand, I definitely want to find my way back into the 911 Turbo, especially in some sort of track environment - that car is just too much fun on the track.

Thank you for a great write up, really helps explain the differences. Now if only you had added the 718 Spyder or a Cayman to the mix….
So...many...EVs...
Was a first time Porsche owner due to Taycan (Turbo S, Gentian Blue, Gray Race-Tex), now RS Etron GT 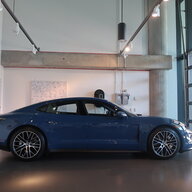 Thank you for the detailed and thoughtful writeup. Makes me want to get back out to the PEC here in Atlanta!

I own both of these cars (992 Turbo S, Taycan Turbo S) and I concur with what you wrote. On the road, I prefer the Taycan as a daily -- it is quieter and much more comfortable. The 911 is still a sports car at heart and it shows through the suspension handling and relative lack of sound deadening.

On the track, the 911 is definitely the way to go. The car is a lot lighter and this shows in the handling. You are also in boost most of the time so there really isn't much turbo lag. Finally, most tracks don't have fast chargers at the moment, so you'll have to drive out of the track to get charged, etc... 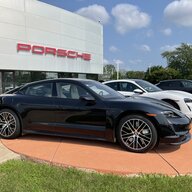 Dream garage - best of both worlds! Curious to what else you have in your garage!


frankchn said:
I own both of these cars (992 Turbo S, Taycan Turbo S) and I concur with what you wrote. On the road, I prefer the Taycan as a daily -- it is quieter and much more comfortable. The 911 is still a sports car at heart and it shows through the suspension handling and relative lack of sound deadening.

On the track, the 911 is definitely the way to go. The car is a lot lighter and this shows in the handling. You are also in boost most of the time so there really isn't much turbo lag. Finally, most tracks don't have fast chargers at the moment, so you'll have to drive out of the track to get charged, etc...
Click to expand...

Chedman13 said:
Dream garage - best of both worlds! Curious to what else you have in your garage!
Click to expand...

Thanks! Just these two at the moment. Trying not to accumulate too many cars -- already have a hard time picking which of these two to take for a trip haha 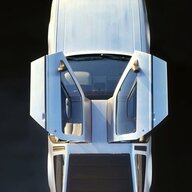 TaycanATL said:
Thank you for the detailed and thoughtful writeup. Makes me want to get back out to the PEC here in Atlanta!
Click to expand...

The 911 is a lot easier to control on the low friction circuit. It weighs over 1500# less. It brakes a lot harder. It avoids understeer. Your corner speed should be higher, and your braking zone smaller.

the taycan blasts out of the corner with instant torque. It’s a lot more weight to move around, but the center of gravity is so low that it’s shocking easy to control … the chassis engineering is mind boggling to make 5000# power so fast through sharp turns. of course the tires won’t last long on a track.

the driver and track experiences are both just different. The 911 turbo is much faster around the track. But it couldn’t run down a taycan on a straight until triple digits so on a street that‘s all way past felony misjudgments. A pointless distinction for street driving.

The gt4 is 500# less than a 911 turbo. Almost a full 2000# less than a taycan. It lacks the turbo torque. It’s much more nimble and the steering is a lot sharper. In experienced hands, it’ll be faster than a taycan around the track. Much higher corner speeds. But it isn’t remotely in the same league for acceleration. In most amateur hands, I’d expect the taycan to be faster around many tracks. No question the taycan is vastly faster at street speeds and scenarios.

The gt4 is the most fun of the 3 for twisty roads, hills, and track time. imo. It’s nimbleness is wasted on highways and it doesn’t shine as much around town. The taycan is a glorious grand touring. The 911 turbo is in between, some Jekyll some Hyde.